The successful American Orthopaedic Society for Sports Medicine 2022 Annual Meeting drew nearly 2,700 participants to Colorado Springs on July 14-17. Surgeons, physicians and other sports medicine specialists gathered from across the country for top-tier education and networking opportunities.

The meeting featured over 400 presenters in 58 sessions, including numerous professional team physicians, sharing their expertise in caring for all athletes and active people. The largest-ever Exhibit Hall had 105 vendors sharing cutting-edge technologies and solutions, such as surgical demos in the exclusive OLC Mobile Lab. 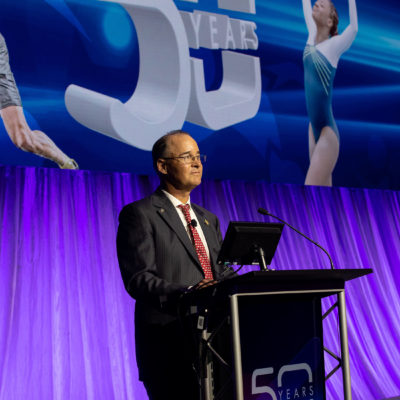 The AOSSM 2022 Annual Meeting was truly an exceptional event, bringing together the best in orthopaedic sports medicine, research and education. Celebrating the Society’s 50th Anniversary at the spectacular Broadmoor Resort with colleagues and friends was a special experience.”

International partners ESSKA and SLARD co-hosted the Global Program Series, and prestigious organizations such as The FORUM, the J. Robert Gladden Orthopaedic Society and the Society of Military Orthopedic Surgeons and our Emerging Leaders joined us for sessions and receptions throughout.

In addition to celebrating the society’s 50th anniversary, AOSSM recognized several individuals and organizations for their contributions to the field and the meeting:

Following a historic 50th Anniversary celebration, we are excited to continue building on AOSSM’s half century of excellence. Register early for the 2023 Annual Meeting in Washington, DC, July 13-16, 2023.

By clicking "Accept", you agree to the storing of cookies on your device and our use to enhance site navigation, analyze site usage, and assist in our communication efforts. Our cookie policy is available here.